Dipping, Swimming and Diving into CLMOOC 2016 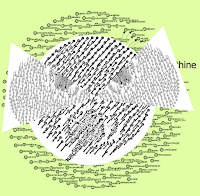 I'm MOOCing again for Connected Learning. There has been a lot happening over the last week and a half. Some of which I can capture in this post.

I started off with an Introduction called "I Hardly Know". I've been dipping in to some of the #DailyConnects with this star inspired poem The Milky Way and planting in the Answer Garden on the term "connecting". I swam with others with Dive Remix of a remix. Even had a aha-moment captured here. I contributed to the journey of a poem to a song which Kevin has documented.

While I watched the Make with Me from Week 2, I made me a 'flying thing'.


From over in Twitter I was inspired by +Deanna Mascle (things that fly), #SNA by+Sarah Honeychurch who posted TAGS Explorer image and +Raymond Maxwell who reached out to people from that. Also to +Kevin Hodgson for his comic that asked if we could "break the MOOC" [ball] and the confirmation from+TERRY ELLIOTT that we totally should!!

I'm capturing my favourites for the week for #F5F via Google Collections. For each fave I've used three words or phrases to describe the highlight for me.