I am the elephant. 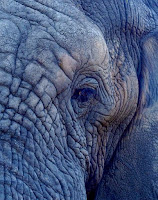 This image was used in the Conversations That Work presentation I virtually attended at OLC Innovate 2017. The presentation titled, Embracing Cultural Diversity in Online Learning Communities, by Biola University gave me lots of food for thought. I was to join this workshop-style presentation via a Kubi (neck in Japanese). I'm no stranger to sticking my neck out with new tech and I was excited to be able to participate this way. 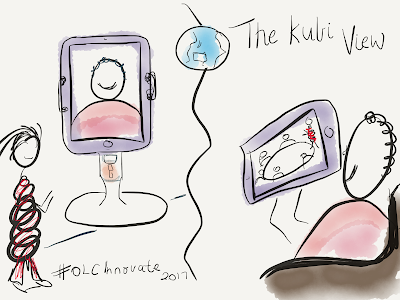 Before the conference I sketched what I thought (hoped) would be the Kubi view. It was going to be different to a birds eye view of the room with a presenter at one end. I knew I was going to be at eye level as we had been given room maps and diagrams of the proposed setup. Before attending the conference I had received some training (watched a webinar) and been in conversation with Clark Shah-Nelson about the concept of using the Kubis during the Conversation That Works sessions.

During this presentation I was struck by the irony of the presenter talking about 'them' and 'us'. The discussion questions were:


The reality of my experience was that I found this a non-safe space. I felt alienated and alone with only a back channel to rely on. As I had audio issues there was no easy way for others to interact with me and we were left, eye-to-eye, mute. As I swiveled towards the speaker, they were interrupted in their speech with a surprised 'oh, hello'. I was told I was expected but it didn't feel that way. 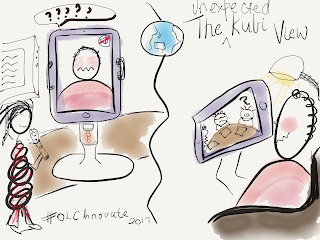 I am the elephant in the room
Nobody knows
Yet they cannot not know
Me
Only blind eyes
Deaf ears
Mute lips
Feel me.

I was lucky to have a back channel with Clark via Slack and he suggested that I join the Kubi after the introductions. I had the live stream open on my computer but the tech was running late and I could only join at about Slide 8 of the presentation, introductions well past.  I heard the presenter suggest the topics and the people at the tables would choose. I was not in that conversation and did not know which tables were discussing which questions. The presenter appeared to be unaware of the elephant in the room and there was no facilitation of the 'head' that was going to pop up on the table. From the image below you can see me (the neck view) and 3 of the kubis that I had access to via the Zoom meeting link. I joined table 4, keen to connect with the people discussing the topics at hand. It was embarrasing, they could not hear me and appeared to be embarrassed with lowered eyes and avoiding eye contact. There is no keyboard to reach for so when audio failed, communication was difficult. I disconnected from the kubi and left a black screen behind.

I next joined Table 1 and after conversing with pen on paper (held up to the camera) I got the sound working on my end. At this point the conversation was all but over and I was purely observing. The crunch for me, came when the facilitated passed around a microphone for input from each table. Really? Could I hold a microphone? Was my opinion even sought? Again I was the observer, at eye level, very obvious but ignored. I disconnected from the Kubi.

I surfed two other areas in the conference that had Kubis setup but I appeared, again, as the elephant. I suspected that the microphones were muted and even my swiveling neck did not draw any attention. As you can see from the main view below, backs were turned and others were far away. While it gave me a lovely peek into the various rooms, there was no room for interaction.
It took a couple of hours for me to wind down from that experience enough to get to sleep (⏰ 3am). In conclusion, if you want to be culturally inclusive in online learning, include people! Be aware of who is virtually there, use the tech to connect, get to know your audience and use all the classroom tricks like introductions, name tags and icebreakers!